Friends from ages past

The dog (scientific name; Canis lupus familiaris or simply Canis familiaris) is one of the most domesticated animals in the world. It is a subspecies of the grey wolf (Canis lupus) and is closely related to foxes and jackals. Both dogs and grey wolves are descended from a wolf species that is now extinct; meaning your furry, cuddly little friend was once a wild animal and sometimes vicious hunter. However, you do not need to worry because years of domestication and evolution have made them into the pets we know and love today. Some studies show that domestication of dogs started about 14000 years ago, others say 12000 years ago but one thing we are sure of is that dogs have been around humans for a long time. Through genetic studies, scientists have pinpointed the location of the first domestication of dogs to Southern China, Mongolia and Europe. The earliest dogs (Bronze Age about 4500 BC) were of five distinct types – Mastiffs, Wolf type dogs, sight hounds, pointing dogs and hunting dogs. Today there are over 400 distinct breeds of dogs.

The Science and Art of Dogs’ loyalty

It should not surprise you to know that dogs are the most popular pet in the world. According to a survey conducted by GfK SE (Gesellschaft für Konsumforschung or Society for Consumer research), dogs are owned by 33% of the respondents.  In the US alone, 50% of pet owners have dogs. So what makes these canines so popular? Dogs are very friendly. They are always ready to wag their tails and lick whomever they consider friends with their tongues and show other affectionate behavior. There is actually a scientific explanation as to why dogs are so friendly. Scientists discovered that dogs evolved with a change in their chromosomes. According to a study published in Science Advances, overly friendly dogs carry two variants of genes called GTF21 and GTF2IRD1. These same genes when absent in humans cause William’s Syndrome –  a condition in which there is a surplus of oxytocin and as a result humans with this syndrome tend to love everyone. Dogs are very loyal. Have you seen the 2009 movie ‘Hachi?’ Hachi is actually the real life story of Hachikō, a Japanese Atika dog owned by a Japanese professor who waited at the train station for his owner to come back from work so they can walk home together. He was so loyal that even when the professor suddenly died at work, Hachikō kept on coming to the train station everyday and at the same time for nine years and nine months hoping that his owner would show up one day. Only death stopped him from coming to wait for his owner. Today a statue of Hachikō stands in Shibuya station, Japan to honor the loyal pet. Now who wouldn’t want to have a pet like that? It seems like there is no limit to what these animals can do. Researchers have also found that dogs can smell cancer. In a study carried out, dogs detected prostate cancer correctly 90 percent of the time! Dogs are also pretty smart. They can learn up to 250 words, interpret human emotions and learn tricks. . Dogs can read emotions. Most dog owners have confirmed that their dogs have been able to cheer them up when they are sad. Dogs usually know when their owners are happy or sad. Many people today owe their lives to their ‘therapy dogs’. The military has attributed a lot of their success stories to the devoted and gallant efforts of their assistant dogs. The list goes on and on.

Dogs and humans: Dogs protect their own 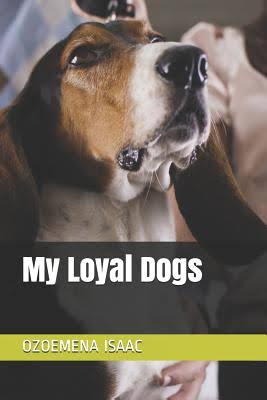 A novel by Ozoemena Isaac , My loyal dogs, shares so many exciting stories of the loyalty of dogs. The author shared many thrilling childhood memories and adventures with dogs.  One of the stories in the novel, Ozoemena shared an incident where his dog nearly attacked his friend while they were wrestling, because it thought its small master was in danger.  Until you experience it, you may never fully appreciate the love, loyalty and protective jealousy with which dogs guard the people they love. see videos below!

Videos of dogs protecting their loved ones

In another touching video, below, you see a dog crying as he walks the street where he used to walk with his late master.

One of my favorite novels ‘Red Dog‘ was a great dig into the attachment that exists between a dog and its owner. Dogs can risk their lives without a second thought, for the people they love.

Despite the faithfulness of dogs, many people still treat them with so much hate. We have hundreds of thousands of dogs out there, hungry and homeless, living through each day under under the uncertainties of street life. Many of these dogs were cast out from the homes of the same people they loved and protected. Many of them were born on the streets by stray dogs, no one to care for them. The ill treatment being meted out to these animals is already costing us a lot. Each year, thousands of people suffer severely from dog bites (and even infections) from stray dogs.  How can we make the lives of these dogs better? How can we keep the streets safe again from stray dogs and save ourselves and our children the potential danger of dog bites and rabies? These are questions for  us and our leaders and pet lovers.  Though we have dog shelters, but what is the living condition like for the dogs in these shelters? And how many of the thousands of homeless dogs can we accommodate?

To complete this article, I asked 3 dog owners questions to give us a sort of exposure into the life of a dog owner. For this interview, I will be using first names for privacy reasons.

Peace: Dogs are friendly. I think there is a special connection we (humans) have with dogs.

Peace: It’s super easy. Dogs understand a lot, signs or even words. The flow is just there.

Peace: Like I said dogs have a special connection with humans so they eat whatever we eat. Rice, biscuits, soups, noodles, name it.

Peace: No, I love them all

Peace: I’ve lived with dogs both inside and outside. It’s difficult to make a choice. If you want your dog for security, then it will be outside but if you want it as a pet. It will be inside.

Theo: For security. That’s the main priority to be honest. I think that’s all. The dog is too scary for a personal relationship (laughs)

Interviewer:  So do you have a dog or you do you love them from afar?

Theo: My current dog is quite big and scary and he plays a lot. I don’t have any personal relationship with him.

Interviewer:  What do they eat?

Theo: Dog food. They can eat any human food but they don’t eat onions, ginger and garlic. They don’t eat spices and they are allergic to caffeine. They also don’t like fruits.

Theo: If I get the dog as a puppy, let’s say a Chihuahua. It can be trained and it can stay indoors.

Elo: Dogs are smart and they are very cute. I feel like their potential is wide and they can do most things.

Elo: It’s quite hectic and sometimes expensive. You need to buy dog food and take the dog to the vet. Pt needs to be potty trained and whole lots of things are involved but it is worth it.

Tell us your dog story!

Have you been a dog owner? have a story to share about your dog? simply comment here or write your story for publishing here